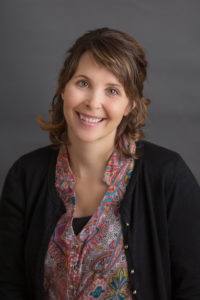 Larisa graduated from Eureka High School, in Eureka, IL. During her senior year, she worked at Eureka Community Bank as a teller and processed checks through the STCP program. Larisa received an Associate’s Degree in Office Professional from Illinois Central College in May of 2003. She worked at American Express Financial Advisors as an Administrative Assistant from August 2002 to October of 2003.

Larisa received her certificate in Floral Design from the Floral Design Institute, Seattle, WA in May of 2005. She worked as a floral designer at Garden Gate Floral from October of 2003 to December 2006. Larisa worked at Morton Community Bank from January to October of 2007 in Deposit Operations; in this position she opened new accounts and was a teller. She joined ACCFS in October, 2007 as the Receptionist and Administrative Assistant. In February, 2010, after the birth of her daughter, she moved to a Part-Time Administrative Assistant position working from home.

Larisa is married to Curt Wettstein and they live in Danvers, IL with their three daughters and one son. She and Curt are active members of the Apostolic Christian Church of Goodfield, IL.

Jesus saw more. He saw what others missed in a setting. He saw what mattered in an interaction. He understood the reasons for a situation when others overlooked it. Jesus saw more. In this episode of Breaking Bread, Arlan Miller and Matt Kaufmann highlight critical purpose for the elderly among

Walking Through the Grief of Suicide

“Grief can’t be avoided; it waits for you to walk through it.” June Knobloch said this. She and her husband understand grief deeply after suffering the loss of their son Jeff to suicide. In this episode of Breaking Bread, Del and June share their story of grief and how they

Describe a parenting scenario to 10 individuals and you are likely to receive 10 different answers on how to best respond. This parenting reality can be both frustrating and relieving because it means there are a variety of ways to handle a specific situation. Research has identified two core factors